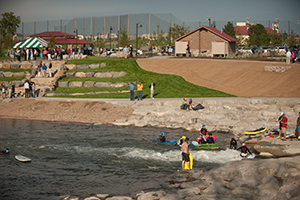 2006 - 2012 - The SPWG was first convened by Arapahoe County in 2006 with a $3 million pledge from the Open Space Sales and Use Tax. By 2012, the SPWG secured more than $22 million in additional funding, including a $5.25 million Legacy Grant from Great Outdoors Colorado. During this time, the SPWG acquired 50 acres of open space and built six new bike/pedestrian bridges, six trailheads, and 3.2 miles of new trail.

2013 - Present - In 2013, the SPWG completed the South Platte River Corridor Vision project to prioritize and program funding for a second major phase of investment along the South Platte River. This process led to another $25 million in projects (including $8 million from Arapahoe County Open Spaces), including significant investments at South Platte Park, Reynolds Landing, and Riverside Downs in Littleton, and River Run and the East Bank Trail in Sheridan and Englewood. An additional $3+ million has been spent to make improvements to Hudson Gardens, Lee Gulch, and Creekside Experience in Littleton and the Bear Creek Trail in Sheridan.

The group has received several awards since its inception, including: